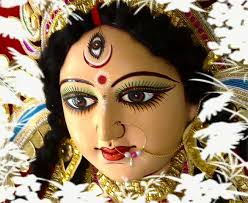 Subho Mahalaya 2018-Everything You Need Is Here

According to our epic, The Ramayana, Durga Puja celebrated in unconventional time.  Let’s dive deep into it.

Well, let’s dive deeper into it. Let’s explore more about this.

Meaning of the Term “Akalbodhan”

Akalbodhan is a word composed of two Sanskrit Terms. Akal and Bodhan. The word Akal means untimed (a=not and kaal=time) and the word Bodhan means to worship. Thus, Akalbodhan means worship of Durga in an uncustomary time. Spring is the conventional time for Durga Puja. In Sanskrit, Basant is Spring. This is why Durga Puja is Basanti Puja in its conventional time.

Background according to Legends

According to the Ramayana, Rama goes to Lanka to rescue his abducted wife, Sita, from the grip of Ravana. Ravana was Demon king of Lanka.  Rama wanted the blessings of Devi Durga before starting for his battle with Ravana. Meanwhile, he comes to know Devi Durga would only be pleased if she is worshipped with 108 Neel Kamal (blue lotuses).

Lord Rama travelled around the world. Even after his long adventure, Rama could gather only one hundred and seven of them. Rama realised Devi Durga won’t be pleased without exact 108 count Blue Lotus. Lord Rama’s eyes resembled Lotus. Rama decides to offer his own eye instead. Durga pleased with the devotion of Rama. She appeared before him and blessed him.

So, as we see that Rama, though in non-conventional time, worshipped Devi Durga and got the victory, Durga Puja is celebrated as Akalbodhan.

Some Sources are from Wiki.

Mahishasura, a lord of Demon. He was born from the belly of a Buffalo, thus got he name Mahishasura. Mahish refers to Buffalo.

According to Vedas, Diti and Aditi were two sisters. Both of whom married sage Kashyapa.

Mahishasura after a long meditation, impressed gods. He received gifts that No Male can defeat him in battle.

This way Ashura overpowered all gods.

After seeing these devastations of Mahishasura, all gods went to Durga for help. They all combined their strength and made Devi Durga stronger.

But Demons keep coming back each year and Devi Durga defeats them each year.

On the day of Subho Mahalaya, Devi Durga Sets her journey back to his father’s home. Stay there for following days and finally returns back on 10th day, called Maha Dashami.

The significance of Subho Mahalaya

Devi Durga, Devi Parvati all are believed to be different forms of the same goddess.

Devi Parvati on this day of Subho Mahalaya, she sets her journey from his husband Lord Shiva’s home to her father’s home. She stays in her father’s home for following days and returns back on the 10th day, Maha Dashami.

Well, Devi Durga has some sophisticated Vahans too. Vahan in Sanskrit means Vehicle. Well, sophisticated is not always what it seems. Each of her four vehicles has some special features too.

Let’s find it out now.

Elephant is one of the four Vahans, that is vehicle or means of transportation that Devi Durga prefers.

This Vahan brings Peace and Prosperity. So in the year where Devi Durga arrives home on Elephant ride, that year she brings a lot of peace, prosperity and harmony with her.

Maa Durga, in the year where she comes back home with a boat, she brings flood with her. This is a year which will have to face a lot of rainfall and floods. Well, after a flood, we have a good harvest.

Do you know what is a Palanquin?

Palanquin is an ancient vehicle among Bengalis. Which is also known as Palki in some language.

In this, one small compartment usually decorated, is carried out by occasionally 4 strong men. This was a popular transportation back in a few centuries.

A VIP is escorted in the decorated compartment. Usually a king or queen or some landlords.

During this phase, if peoples stand united then they can overcome any hardship. But if they do not cooperate with each other, the epidemic could cause severe damage.

While riding on a horseback, it signifies devastation.

In the year when Devi Durga comes home riding on a Horse or Turang, she brings a lot of misfortune and devastation with her. This phase is probably a tough time to tackle.

One the Day of Subho Mahalaya Morning 2018

On the Day of Subho Mahalaya Morning, here is a list to do.

By early, it means real soon. Around 4 AM or so.

Well if you are an early peep, this won’t bother you. But for all night owls, this is an important day of the year. You need to get up soon and enjoy this awesome experience on Subho Mahalaya 2018 morning.

2.Listen out to Radio or FM, Mahishasura Mardini

On this day of Subho Mahalaya 2018, as soon you turn on Radio or FM, you will hear amazing chantings. Being a Bengali, I enjoyed this myself even when I was just a few years old.

These sounds purify the mind. We start feeling so good.

Birendra Krishna Bhadra is the Legendary artist of Mahishasura Mardini for Subho Mahalaya. On this morning of Subho Mahalaya 2018, you must listen to his orations. You will easily find these over youtube.

One the morning of Subho Mahalaya 2018, or on any consequent year you will find tv shows displaying all heroic acts of Devi Durga. How demon Ashuras prevailed over Gods. Then how Devi Durga received immense power from other gods. After receiving such power, she finally defeated Demon King Ashura.

On the day of Subho Mahalaya each year, she comes back to parent’s home.