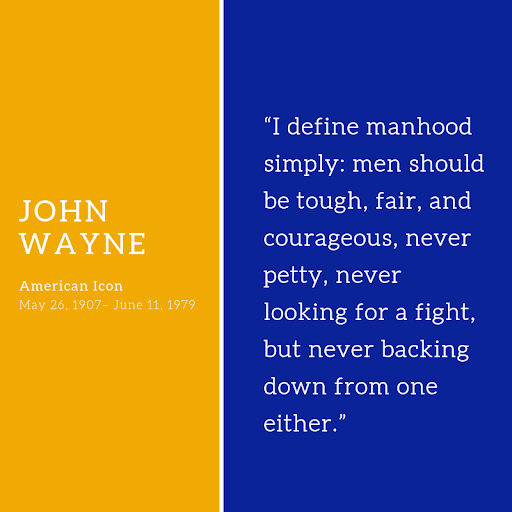 25 Mindblowing John Wayne Quotes You Will Ever Find Again

Marion Mitchell Morrison, professionally known as John Wayne was one of the greatest actors American Film Industry has ever had. For three decades continuously, he was among the top box office draws. The impact he made in the industry had given him the reputation of a movie icon over time.

Here is the list of freshly curated Best of the John Wayne Quotes for you.

Also, check out our post on Surprising Karma Quotes. 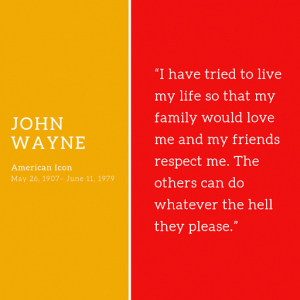 Here is the list of Best Quotes by John Wayne

1. “A man deserves a second chance, but keep an eye on him.”

4. “All battles are fought by scared men who’d rather be someplace else.”

6. “I’m responsible only for what I say, not what you understand.”

7. “Tomorrow hopes we have learned something from yesterday.” 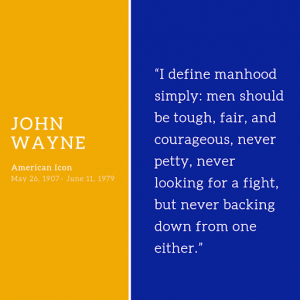 8. “Nobody should come to the movies unless he believes in heroes.”

9. “All I’m for is the liberty of the individual.”

10. “I’ve always followed my father’s advice: he told me, first to always keep my word and, second, to never insult anybody unintentionally. If I insult you, you can be goddamn sure I intend to. And, third, he told me not to go around looking for trouble. ”

11. “Life is tough but it’s tougher when you are stupid.”

13. “I was ashamed to admit I was hipped to the idea of acting. That’s why I started in with the props.”

14. “Courage is being scared to death… and saddling up anyway.”

15. “Real art is basic emotion. If a scene is handled with simplicity – and I don’t mean simple – it’ll be good, and the public will know it.”

16. “I suppose my best attribute, if you want to call it that, is sincerity. I can sell sincerity because that’s the way I am.” 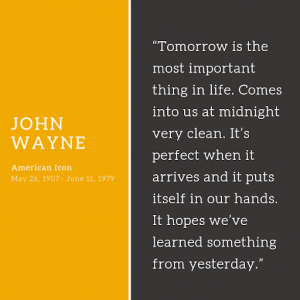 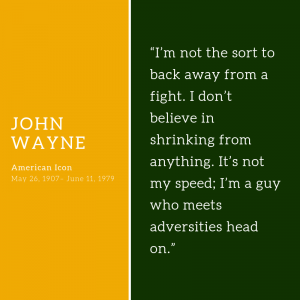 22. “In westerns, you meet a hardy bunch of characters. There is no jealousy on such pictures.”

23. “When you come against trouble, it’s never half as bad if you face up to it.”

24. “In my acting, I have to identify with something in the character. The big tough boy on the side of right — that’s me.”

25. “A goal, a love and a dream give you total control over your body and your life.”

Though he was regarded as racist while he was alive, the impact he created in movies during those days stays alive even today. I hope you found these quotes as interesting as we did, until next time and next article, till then mull over: “Mister, this is my birthday. Gimme the best in the house.”