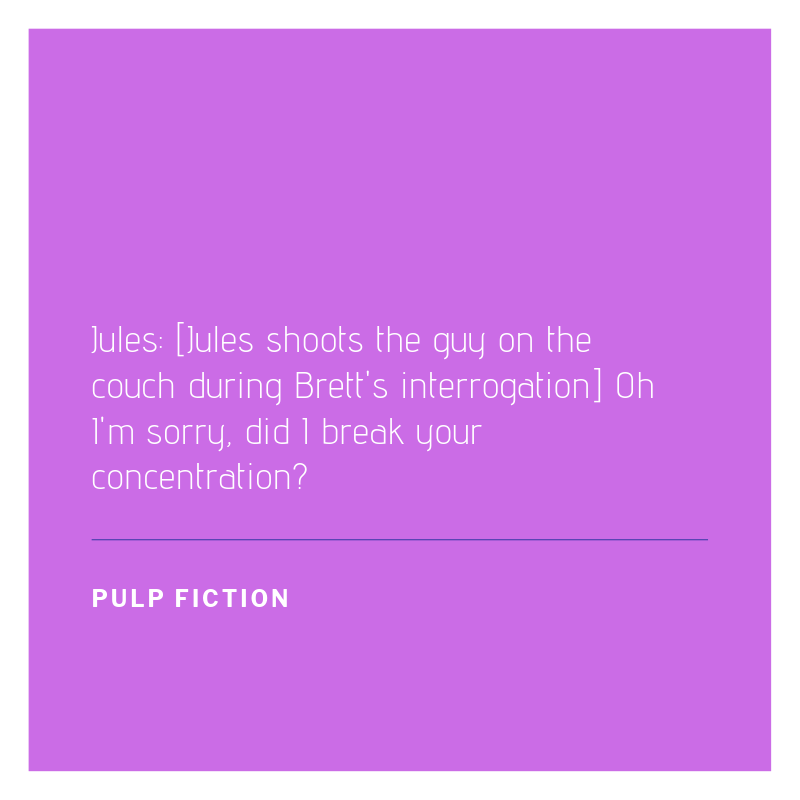 Quentin Tarantino’s film, the 1994’s Pulp Fiction is definitely one of the best movies ever created. Its dialogues had the fans reeling for more. Featuring John Travolta and Samuel Jackson, I curated some a list of some of the best dialogues you can read again and have fun.

Read our compilation of Best Quotes of Albus Dumbledore from Harry Potter Movies.

Mia: “Uncomfortable silences. Why do we feel it’s necessary to yak about just anything in order to be comfortable?”

Mia: “That’s when you know you’ve found somebody special. When you can just be quiet for a minute and comfortably enjoy the silence.”

Beautifully acted scene by Travolta and Uma Thurman as Mia.

Jules: “Well, there’s this passage I’ve got memorized that sort of fits this occasion. Ezekiel 25:17. The path of the righteous man is beset on all sides by the iniquities of the selfish and the tyranny of the evil men. Blessed is he who, in the name of charity and goodwill, shepherds the weak through the valley of darkness, for he is truly his brother’s keeper, and the finder of lost children. And I will strike down upon thee with great vengeance and furious anger those who attempt to poison and destroy my brothers. And you will know my name is the Lord when I lay my vengeance upon thee!”

Definitely one of Samuel L. Jackson’s finest moments on film. 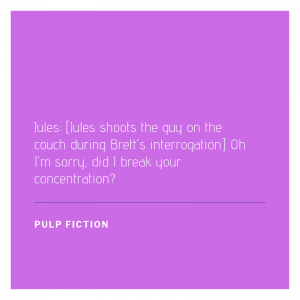 3. Vincent: “You know what the funniest thing about Europe is?”

Vincent: “Alright, well you can walk into a movie theater in Amsterdam and buy a beer. And I don’t mean just like in no paper cup, I’m talking about a glass of beer. And in Paris, you can buy a beer at McDonald’s. And you know what they call a, uh, a Quarter Pounder with Cheese in Paris?”

Jules: “They don’t call it a Quarter Pounder with Cheese?”

Vincent: “Nah, man, they got the metric system, they wouldn’t know what a Quarter Pounder is.”

Jules: “What do they call it?”

Vincent: “They call it a Royale with Cheese.”

Jules: “What do they call a Big Mac?”

Vincent: “I dunno, I didn’t go into Burger King. But, you know what they put on french fries in Holland instead of ketchup?”

This one is the crowd’s favorite!

4.    Jules: “Oh, man, I will never forgive you for this. This is some ridiculous repugnant thing.”

Vincent: “Jules, did you ever hear the philosophy that once a man admits that he’s wrong that he is immediately forgiven for all wrongdoings? Have you ever heard that?”

Jules: “Get away from my face with that thing! That man that said that this never had to pick up itty-bitty pieces of skull on account of your dumb ass.”